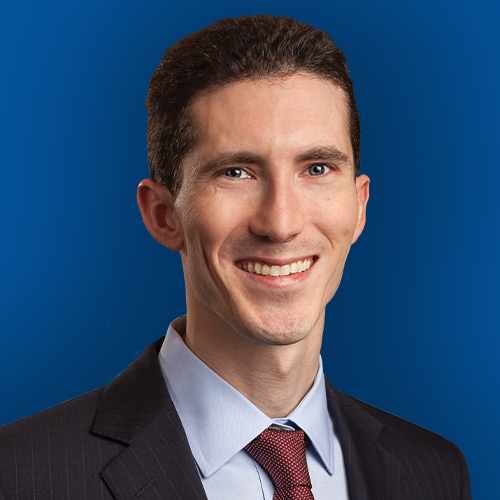 Board-certified and fellowship-trained Dr. Gregory Klingenstein grew up in northern New Jersey and attended Wesleyan University, where he graduated with honors. He then received his medical degree at the Icahn School of Medicine at Mount Sinai with distinction in research. Dr. Klingenstein did his residency at the Tufts Medical Center Orthopedic Surgery Program, which included a chief resident position at the New England Baptist Hospital. After his residency, he completed two fellowships at the Hospital for Special Surgery in New York, one in adult reconstruction and joint replacement, followed by a second year of hip preservation training. The hip preservation program was lead by Dr. Bryan Kelly and included a clinical rotation at the Schulthess Clinic in Zurich with Dr. Michael Leunig. Dr. Klingenstein has lectured nationally and internationally on femoroacetabular impingement (FAI) and total hip replacement bearing options for young, active patients. He has published peer-reviewed articles on FAI in athletes and biomechanics of total hip replacements.

Dedicated to providing exceptional orthopedic care, Dr. Klingenstein is available to see patients at our offices in Medford, Moorestown, and Voorhees.

To date, I've had an excellent experience. I have one consideration going forward- it would have been helpful to me if I saw Dr. Klingenstein or one of the PAs after the surgery on the day of the surgery. Other than that, RO has been very professional with terrific service.

I really like that dr Klingesnstein really helped my mom with her hip. She is older and wasn't able to move around and missed time with her grandkids. She moves like she is 60 again and I love it!!!! THANK YOU DR. KLINGENSTEIN!!!!!!!!

Staff was nice. Easy to get a quick appointment.

Professional and personable. A terrific combination

Very good experience. In and out quickly from surgery. Care at hospital remarkable- everyone helpful, understanding and kind.